The Royal Wedding in Portrait : The Quietly Bucks Tradition.

For those of you still experiencing royal wedding fever, you can now pore over the official portrait of Prince Harryand Meghan Markle‘s big day. And just like the union itself, it has broken from tradition in subtle, but notable, ways. 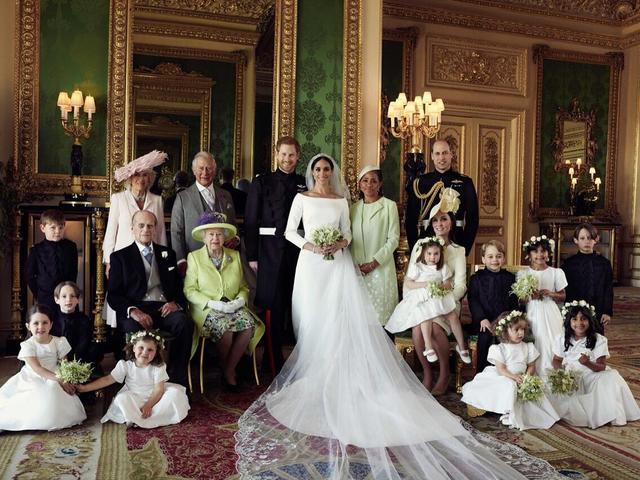 The Duke and Duchess of Sussex have released three official photographs from their Wedding day. This photograph was taken by photographer @alexilubomirski in The Green Drawing Room of Windsor Castle, following the carriage procession #RoyalWedding

The deviations from typical royal wedding portraiture include: some members of Harry’s side of the family are posed on Meghan’s side, the Duchess of Cambridge is seated while most of the other adults are standing, and Queen Elizabeth is showing more emotion than usual.

Prince Harry biographer Duncan Larcombe speculated to Harper’s Bazaar why these unusual decisions were made. It turns out that it is up to the photographer (in this case, Alexi Lubomirski) to determine where everyone is placed, and he probably made his choices based on physical balance and polite consideration.

Since Meghan’s mother Doria Ragland was the only member of her immediate family who was able to attend, her side of the photo would have been mighty empty if all of Harry’s family had been placed on his side. So from that standpoint it made sense to situate Prince William and Kate closer to Meghan.

Larcombe also figured that letting the Duchess of Cambridge be seated provided symmetry to the Queen and Prince Philip sitting on the other side. And surely the Duchess, having just given birth less than a month ago, appreciated the chance to get off her feet.

For those of you wondering who the other children besides Prince George and Princess Charlotte are, that’s Master Jasper Dyer standing next to Prince Philip. Sitting in front of him are Master Brian Mulroney, Miss Ivy Mulroney and Miss Florence van Cutsem. Standing next to Prince George are Miss Rylan Litt and Master John Mulroney, and the girls seated in front of them are Miss Zalie Warren and Miss Remi Litt.

Tech Agentz - July 9, 2020 0
ZOOM MEETING: 3 DOS AND DON'TS BEFORE YOUR ZOOM MEETING The coronavirus COVID-19 pandemic has sent many of us out of the office and into our homes,...

Business Agentz - July 7, 2020 0
SCAMMED: 10 UNIQUE RULES TO AVOID GETTING SCAMMED Scammed? Have you ever bought a product based on a powerful testimonial, only to find that it...